After four years of planning, fundraising and hard work we were delighted to see the day when our Donkey Hospital was officially opened by Rt. Hon. Ed Vaizey MP on Sunday 14th October 2018.  As a charity dedicated to the welfare of mistreated and neglected donkeys we wanted to give them the very best care we could by having an onsite facility to operate indoors and to be able to minimise the risk of infection. 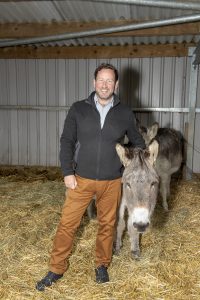 To find out how the Donkey Hospital became a reality please continue to read below.

Keith Lawrence and his family had been supporters of Island Farm for a number of years. Keith was a Knight in the Royal Antediluvian Order of Buffaloes and wanted to help the sanctuary with something special. In 2014, after discussions with co-founder of Island Farm, John McLaren, it was agreed that a safe, sterile facility to treat donkeys was desperately needed and so the Donkey Hospital project began.

After obtaining planning permission, drawings and costings were produced and fundraising began to meet the cost of the project. The groundworks included the installation of services and a special sealed underground waste tank. This first phase cost £17,500. Each phase of the project would only be able to proceed as funds allowed which meant a four year wait before completion.

Phase two was the purchasing and erection of the hospital building, blockwork for the interior walls and recovery stables and the installing of the fencing and gates for the outside excercise yards which cost a further £19,500.

Phase three involved the installation of a special cushioned rubber floor and wall covering in the operating room, kitting out the vets preparation room and all the other fixtures and fittings needed to provide a fully functioning hospital. Including equipment this phase cost £26,000. The trustees and staff are grateful to local building companies and suppliers for donating various items to the Donkey Hospital. Without this support the total figure of £63,000 would have been higher.

Sadly, Keith Lawrence passed away suddenly in August 2015 but his wife Heather and the family courageously continued with fundraising for the project as a tribute to Keith.

Looking to the future fundraising will continue for phase four which will allow the Hospital to purchase new surgical and diagnostic equipment.