Perfect weather greeted our annual Donkey Show and Fun Dog Show on the 5th July when 38 donkeys from as far afield as Bristol, Huntingford and Crawley were entered in classes such as Best Condition and Turnout, Best Stallion, Best Mare, etc.

New for this year were Driving Classes with beautifully turned out donkeys in harness pulling equally impressive carts. We would like to thank Angela and Peter Scales for arranging such a fantastic addition to the show. Feedback has been very positive and it is something we would definitely like to continue in 2016. The Show Drive through the picturesque village of Brightwell-cum-Sotwell was well supported with Ros Lester, the Deputy Mayor of Wallingford, in attendance. Ros also judged the Concours d’Elegance class.

The results for all the In Hand and Driving Classes are below: 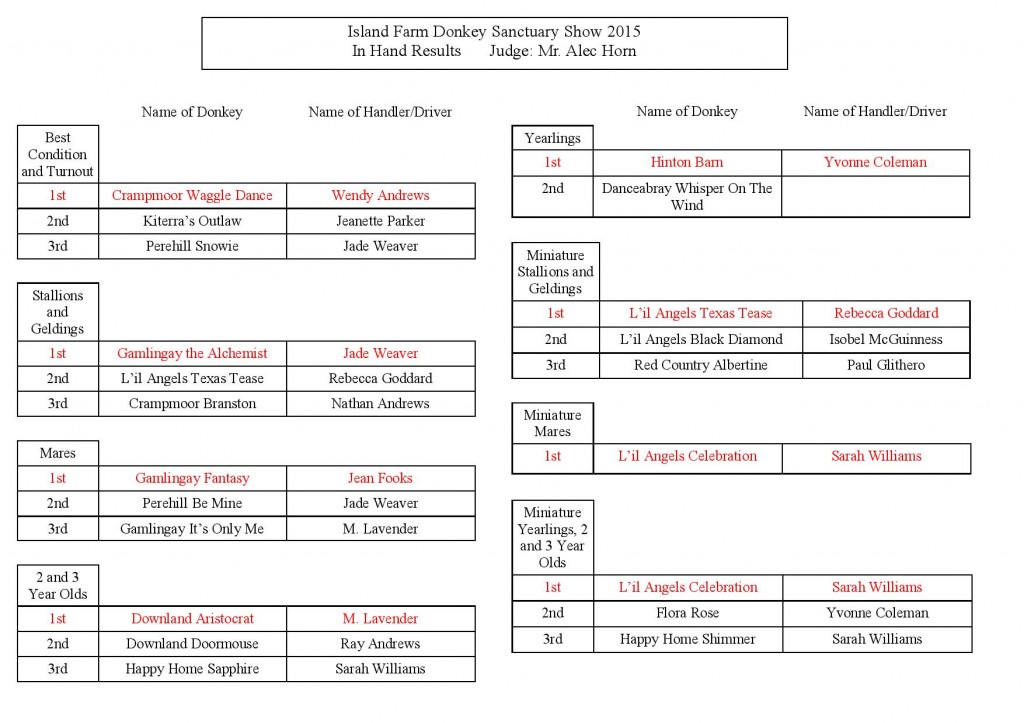 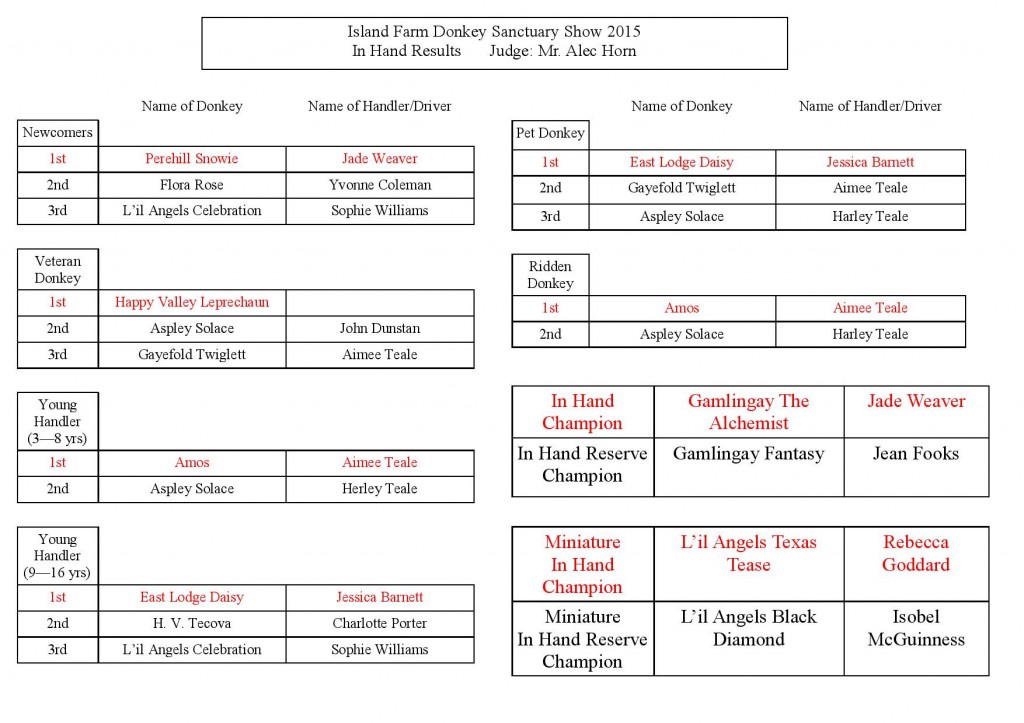 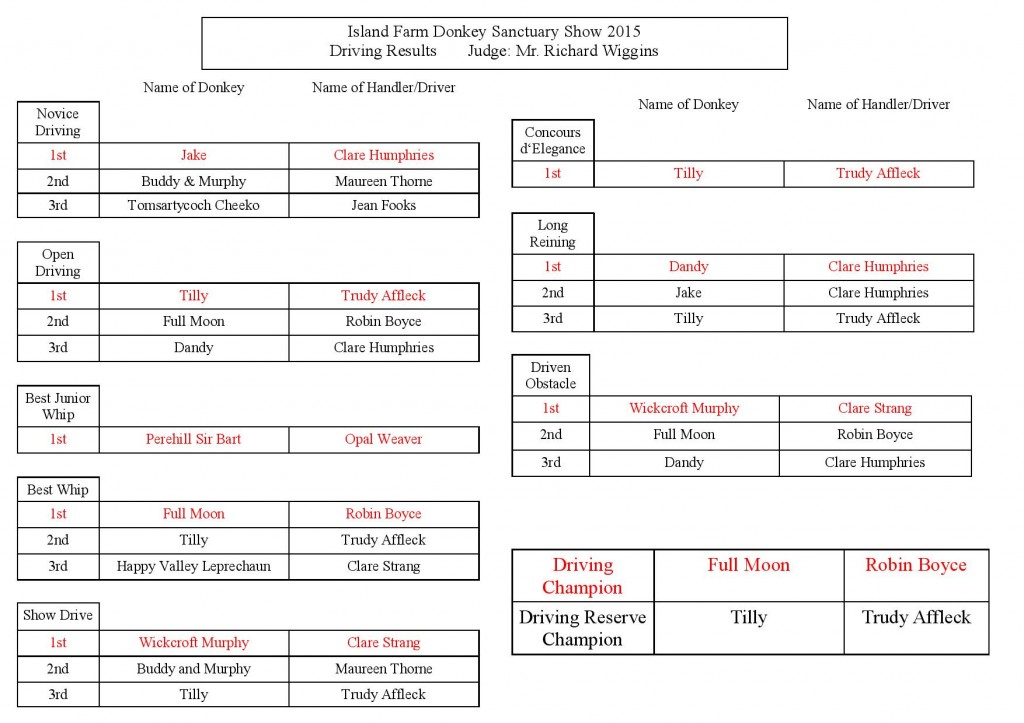 Please go to our Gallery page for images from the day including some from our Fun Dog Show. Thank you to Rachel Philo Photography for the photos of the In Hand and Miniature Champion donkeys. Check out www.rachelphilo.co.uk for more great photographs.

We would like to extend our thanks to Mr. Alec Horn, the In Hand Judge and the Driving Judge, Mr. Richard Wiggins plus all the stewards, volunteers and sponsors for making the show possible.

Our two day Country Show on the weekend of the 24th and 25th May was a good example of how the changeable British weather can make such a difference to an outdoor event. Early Saturday morning saw grey skies and a steady rain which affected the number of exhibitors and prompted a few last minute change of plans.

Lunchtime saw the clouds clear and the sun shining through but the wet conditions had already affected the show attendance. This was a pity as we had some outstanding dance displays from the Viv O’Gara School of Irish Dance and ‘Ashnah’, a fusion of Eastern, African and Spanish Flamenco dancing.

Mr. Muddles Magical Mayhem provided some excellent entertainment for young and old alike and several children were seen clutching their balloon animals tightly (but not too tight!). Also appearing in the show marquee were folk based ‘The Potting Shed Band’.

The Saturday evening lifted everyone’s spirits with a few games of bingo and we were delighted when both the Irish dancers and Ashnah were able to give another fantastic display on the stage. This was something new for this year’s show and was a real hit. Live music was provided by ‘Ridgeway’, a local duo with a great sound.

An advantage to having a two day show is that you get another chance and the forecast for a better Sunday was spot on. The sun was out early and it’s warmth dried the ground so well that it was hard to believe that 24 hours can be so different. With many more exhibitors, dancing, demonstrations and arena displays it was a great day.

Also during the two days were the fun dog show, craft stalls & demonstrations and model displays in The Barn where visitors could take a welcome break for refreshments.

The Show Committee are very grateful to Waitrose, Warmington Estate Agents. Fugro and Arthur Marsh Insurance for their sponsorship of the show and to our band of volunteers for giving up their time to help make our 2014 Country Show so enjoyable.

Donkeys have a special religious connection, non more so than on Palm Sunday that falls on the Sunday before Easter. This day commemorates the entrance of Jesus into Jerusalem on a humble donkey (Matthew 21:1-9), when palm branches were placed in his path, before his arrest on Holy Thursday and his crucifixion on Good Friday. It thus marks the beginning of Holy Week, the final week of Lent.

In many Christian churches, Palm Sunday includes a procession of the assembled worshipers carrying palms, representing the palm branches the crowds scattered in front of Jesus as he rode into Jerusalem. The difficulty of procuring palms in unfavorable climates led to their substitution with branches of native trees, including box, yew, willow, and olive. The Sunday was often designated by the names of these trees, as in Yew Sunday, or by the general term Branch Sunday.

The symbolism of the donkey may refer to the Eastern tradition that it is an animal of peace, versus the horse, which is the animal of war.[1] A king came riding upon a horse when he was bent on war and rode upon a donkey when he wanted to point out he was coming in peace. Jesus’ entry to Jerusalem would thus symbolize his entry as the Prince of Peace, not as a war-waging king.[1][2]

Island Farm are proud to have donkeys attending several Palm Sunday Services leading the processions of the congregations. Check our events page to see if there is a donkey coming to your area. We have included times of the services but these may be subject to change so please check with your local church.

Some above information courtesy of Wikipedia

On Wednesday 12th March the sanctuary was honoured to be invited to take part in a very special event organised by the Hop Skip and Jump Foundation, a charity that provides day and evening respite care, 7 days a week, to children and adults with life limiting illnesses, disabilities and special needs. www.hopskipandjump.org.uk

Not content with a small scale event, Gloucester Cathedral was the amazing venue when donkeys and children from local special schools came together to depict the life of Jesus Christ as seen through the eyes of the humble donkey. Several of the children attending the event played the parts of Jesus, Mary & Joseph and shepherds.

John McLaren and Linda Chilton took two of our donkeys, Jack and Chocolate and as you can see, looked very much the part in their costumes.

The Service was conducted by The Reverend Celia Carter MBE, founder trustee of Hop Skip and Jump and Canon Andrew Bowden.

While the children and the donkeys played their parts, hymns were sung and the congregation was accompanied by the Cotswold Male Voice Choir. 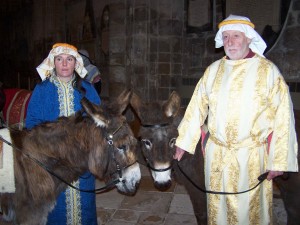 It was a wonderful morning meeting some amazing children and the dedicated people from Hop, Skip and Jump.

The current spell of dryer weather has allowed the paddocks to start to drain but it will be several weeks before we can start to turn the donkeys out. However, we are open as normal from 11 am to 4 pm and the donkeys would be very happy to welcome visitors during this half term. The Visitor Centre is open every day through the holiday so if you fancy a cuppa and a slice of cake that’s the place to go.

We have been contacted by many concerned supporters asking how the donkeys are coping during all the wet weather we have been getting. As you can see from these images, the paddocks are very waterlogged and will be out of action for a good while yet, especially with more rain forecast. Thankfully the donkeys all have shelter and a warm dry bed and are managing well with the situation although as you can imagine, the feed bill has rocketted!

Thank you to everyone who has contacted the sanctuary…we could have had it much worse.

Welcome to our new website. It is with great excitement that we have launched our new site today and we are looking forward to hearing your comments. Using this site has been made much easier and we intend to keep it fresh and updated regularly keeping you all informed with everything donkey! 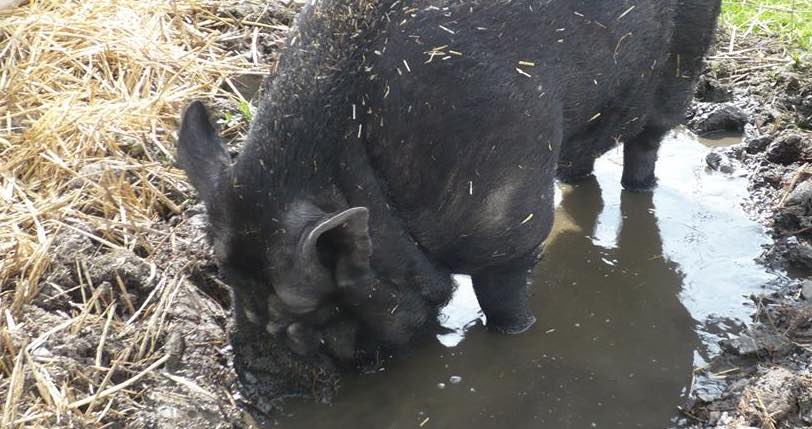